Stepped outside my usual and went for Italian. I was pleasantly pleased with the food.  I ordered a tequila based drink, it was refreshing.  They didn’t have the pumpkin ravioli, I was a little disappointed. I got the spinach salad which was really good.  It was served in a cheese bowl, yum!  My homegirl ordered the salmon crostini for an app.  It was served on thick french bread, way bigger than the usual crostini. She could only eat two.  For our mains, salmon and a shrimp pasta dish both had a brandy based sauces. The salmon was cooked well, it had a grain mustard sauce, it was delightful. The sides were good.  I’m not a fan of shrimp, although her dish was well seasoned.  Dessert, now I skipped over the tartufo only because I saw creme brulee. Now when I saw the tartufo I was shocked. It was a chocolate shell, with ice cream in the middle.  It looked amazing. The first order came out with berries and my homegirl is deathly allergic. The second one was a different flavor, it was fine but she wanted the first flavor minus the berries. There seemed to be a loss in translation at that point.  My dessert was great. I would definitely get two desserts next time. 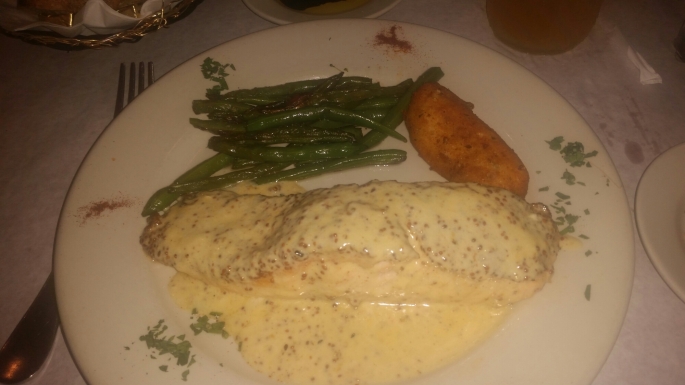 Posted from WordPress for Android