I absolutely love birthdays, with them come dinner and usually cake but always some sort of dessert.  My sister and my niece are a day apart. This year my niece turned five and my son had a Boy Scout event the same weekend. My sister decided to go away,  I couldn’t go Mommy duties over sister duties. No worries my sister had a restaurant picked out and reservations made for dinner. The four of us, my mom, two sister’s and I were all on time, amazing.  We ordered three drinks, the Hong Kong,  No Mames and Dr. Funk. I loved the names of all thier drinks, they have an extensive drink menu.  I may have mentioned I am a tequila girl, two of those drinks were tequila based and the other was rum based.  The drinks were awesome!  We ordered a few appetizers. Kale salad,  it had these crispy homemade potato chips that they called croutons.  I was an immediate fan of the salad.   Steamed dumplings,  they were steamed dumplings.  The shrimp was served in the pan it was cooked in with a fantastic bread served in the side.  Mushroom croquettes, I don’t like mushrooms if I see them. These were pretty good. The dipping sauce probably won me over.  Mains!! I got African chicken with slaw.  It was so good.  The sauce was really tasty and not over powering.  The slaw was the perfect cool compliment. Birthday girl had lobster,  there was none left.  My mother had Hakka noodles with vegetables.   She enjoyed it, it had to have a kick to it.  She isn’t satisfied unless there’s some heat.  My sister had Hake, he fish was light and flaky. I thought it could use a little heat, it had a nice flavor.  We had long beans, bok choy and black rice.  The black rice was divine, it surprised me. The veggies were seasoned well.  Desserts!! We had two Diablo chocolate desserts and malasadas, like a beignet.  The Diablo Thai chili chocolate with this super thin brittle on it.  Not sure words can describe how delicious it was. The birthday girl got a Tropical storm dessert,  rum soaked fruit with a ginger whipped cream.  Ginger is one of her favourites.  This meal was great.  This place has a lounge downstairs,  so the party could continue. I would love to go back, more drinks and definitely dessert. 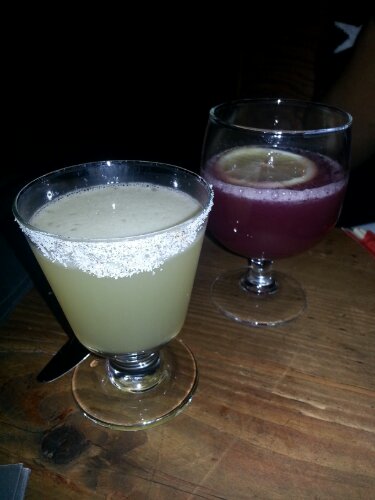 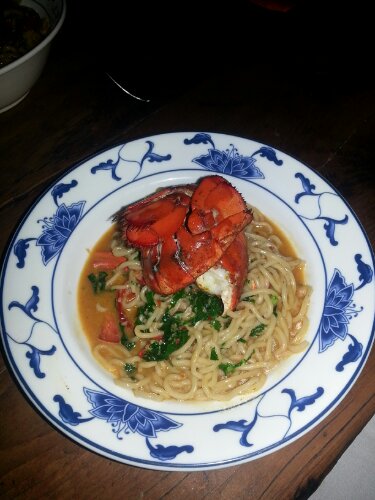